The Museum of American History

The Museum of American History is located at
302 South 7th Street, Mapleton, Iowa.

In 1988 Keith Robinson purchased the Trinity Memorial Episcopal Church and the neighboring hall and developed an extensive museum. His personal collection of historic artifacts would provide the first collections of the museum. The Museum of American History would focus on important periods in our country's history. Keith's collection of political Americana would be a principle portion of the exhibit. Local history would be highlighted and appear with important national events.

Before a museum could open extensive work needed to be completed. Some of the major projects included patching and plastering the walls and painting. The building was completely rewired and the floor was refinished. Display cases were built and displays developed.

Extensive research and documentation was necessary to have the US Department of the Interior list this building on the National Register of Historic Places. This listing recognizes the architecture preserved in the building.

After several years of work the museum officially opened September 21, 1996 - almost 100 years to the day following its dedication.

Trinity Memorial Episcopal Church was built in 1896 and commissioned in 1895 by C. I. Whiting as a memorial to his wife Flora E. Giddings Whiting. Work began in the spring of 1896, and the church was consecrated on September 20, 1896.

The building was designed by Edward S. Hammatt of Davenport a well known Iowa architect from 1883 until his death in 1907. He drew the plans for at least seven Episcopal churches in Iowa. This building is the best example of Hammatt's original work.

The building remains one of the best examples of Gothic Revival and Romanesque building design in this area of the state.

The magnificent stained glass windows predate the building and were donated to this church by the St. Thomas Episcopal Church congregation of Sioux City. The windows had been removed from their church that was torn down in 1892.

The building cost approximately $15,000 and was deeded to the Trustees of the Diocese of Iowa in 1896.

The last service in the building was held in 1984 - the funeral of Charles G. Whiting - the son of C. I. and Flora Whiting. Deconsecration services were held in 1988.

The Guild Hall, located east of the church building, was completed in 1926.

A small sample of the displays you will see when visiting The Museum of American History. 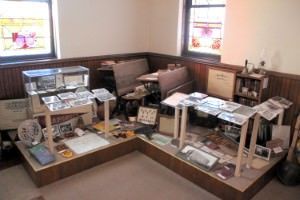 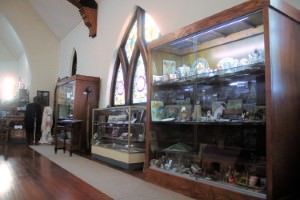 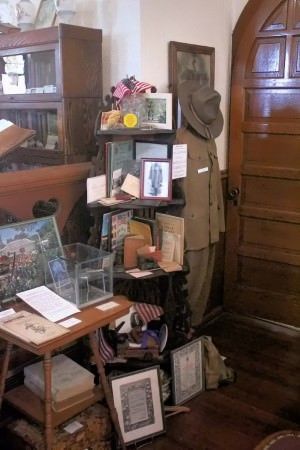 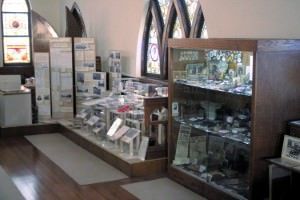 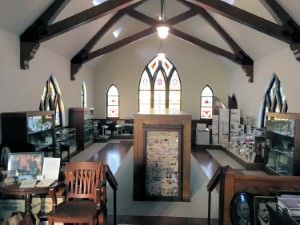 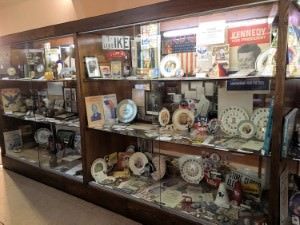 "Published originally in the Mapleton Press during Mapleton's 125th year,
this book, written by Keith Robinson, includes 52 stories of Mapleton's past Not included in the original newspaper articles, the book features a large collection of photos that have not been published in previous Mapleton history books. Anyone with a connection to Mapleton will find the stories fascinating.

"This unique collection of historical stories and photos is available by mail. Please use the link below to print your order form."

Order your copy of "Mapleton Iowa The First 125 Years" written by Keith Robinson.