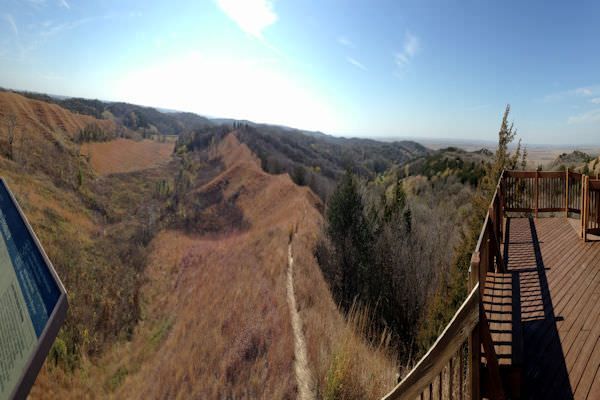 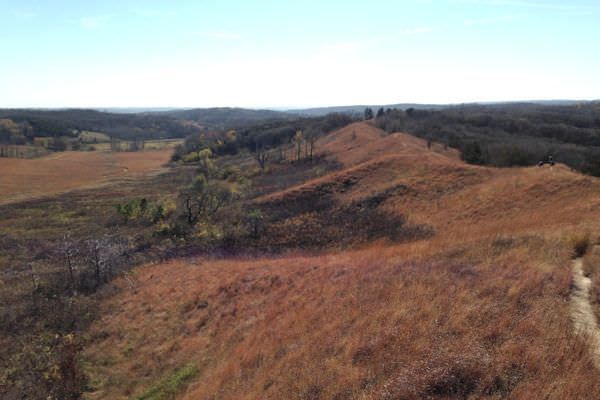 The Loess Hills were formed between 14,000 and 24,000 years ago. Active glaciers covered the area and during warmer months the glaciers would melt causing enormous flows of water through the Missouri River Valley. Strong winds caused the silt left behind to accumulate and settle into bluffs, some exceeding 200 feet.

The Loess Hills in western Iowa are now covered by prairie and forest although some areas are privately owned and farmed by area residents. Breathtaking views from bluffs overlooking picturesque valleys are common along the Scenic Byway which winds through 220 miles of western Iowa.

Several trails wind their way through the rugged Loess Hills, and along the many streams and springs found in the area. A hike in these graceful hills, sometimes known as "Fragile Giants" will give you an opportunity to view exquisite wildflowers, prairie grasses, upland timber and home to populations of white tail deer, quail, squirrel, pheasant and turkey

The 344 acre Preparation Canyon State Park is a remote and lovely area still relatively untouched by humans. The park is located in Iowa's unique Loess Hills and is surrounded by dramatic ridges on the north, south and west. It provides a beautiful backdrop for hikers and family picnics. Picnic tables, a shelter and non-modern toilets are provided. In order to help protect the canyon's natural seclusion and the remaining evidence of its dramatic past, camping is restricted to hike-in camping only at the designated sites. Preparation Canyon State Park lies at the very north end of Loess Hills State Forest.

Loess Hills State Forest is located in west-central Iowa in Harrison and Monona Counties. It is comprised of 4 units totaling 11,600 acres. The Little Sioux Unit, 3,017 acres, lies between the towns of Little Sioux and Pisgah. Approximately 30 miles from Mapleton.

The Preparation Canyon Unit, 3,216 acres, is located north of the Town of Pisgah. This unit has a small lake with good fishing. An overlook, constructed in 1997, provides visitors with a spectacular view of the forest.